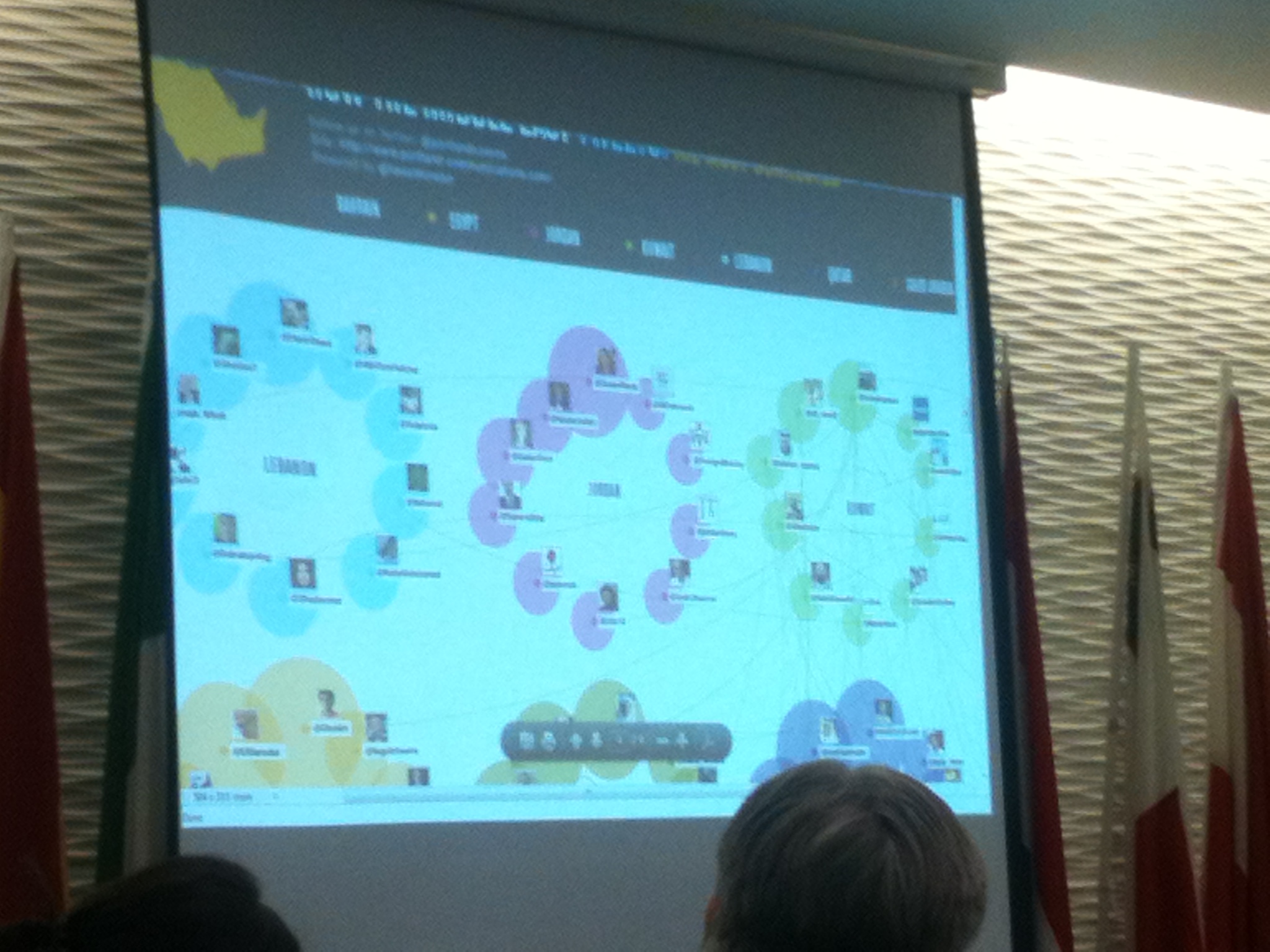 Digital Diplomacy—the process by which national representatives use social media to make productive, personal and interactive connections with domestic and international populations—is changing the complexion of diplomatic culture and practice in the early 21st century.

This was the key concern, and opportunity, that underpinned the Digital Diplomacy Mapping Exercise that I attended on 9 November. The one-day workshop was an extraordinary meeting of representatives from Embassies and High Commissions, the European Parliament, as well as media organisations, PR agencies and even a smattering of academics. The premise of the event was to try and better understand whether, and how, social media is influencing world affairs and global geopolitics, whilst showcasing mechanisms for verifying, mapping and visualising social media.

The day kicked off with a brief talk from the Head of Press and Digital at the Foreign & Commonwealth Office (FCO), Carl Newn, who addressed the complexities of developing digital strategies in an era of rapidly evolving technologies. Alison Daniels, the FCO’s Chief Digital Officer, went on to provide insights into the ways in which the FCO are going beyond the occasional “set pieces” of international relations (large-scale global meetings, conferences and junkets) to engage audiences with the ‘everydayness’ of diplomacy and international relations. Over the past few years, for example, the UK FCO has developed its digital diplomacy capacities to the extent that it now communicates its message on Twitter in 47 languages—far exceeding the language coverage of Britain’s most prominent agent of public diplomacy, the BBC World Service. But, digital diplomacy goes beyond ‘broadcasting’. The Foreign Secretary, William Hague, has an active twitter account and regularly participates in twitter/social media discussion sessions with interested parties. Additionally the FCO used crowd-sourced information, including twitter, to inform the recent White Paper on the future of the Overseas Territories. Digital diplomacy, in other words, is about listening as well as broadcasting information.

For Lynn Platt (Press Affairs, US Embassy), this interactivity is one of the hallmarks of “21st century statecraft”. The US Embassy in London recently created a series of animated and entertaining videos—released to coincide with the US election campaign—that sought to explain the intricacies of the US voting system. These videos have since been translated into multiple languages. While this campaign might be thought of as a fairly traditional bit of ‘public diplomacy’ (akin to information films), they also represent an initiative within the US embassy to promote the initiatives of “native digital speakers” and to engage directly with international publics and audiences who were previously beyond the reach of a traditional embassy.

Running throughout several panels were issues of ‘trust’ and ‘verification’ of social media, something that Klaus Dodds and I have reflected on in this publication relating to a DARPA sponsored project a few years ago.

Nori Shikata—the former Director of Global Communications to the Prime Minister of Japan—reminded us of the importance of having a ‘verified’ and trusted identity during moments of national crisis, when trustworthy information is at a particular premium. It is important to remember, however, that trust is contingent on a range of political and geopolitical factors. While William Hague might be considered a reliable and trustworthy ‘voice’ in an Anglo-American context, his role as a member of the British Government may be subject to considerable scrutiny in, for example, Iran.

‘Trust’ is of equal concern for media organisations using Twitter to gather information about global events in areas where journalistic practices are restricted. Claire Wardle from the news organisation Storyful gave a brief insight into the methodologies used by her organisation to verify news stories gathered from social media sources within Iran, Syria, Egypt and elsewhere. As a geographer, it was amazing to hear how Claire’s team scour a suite of online technologies, including the freely available Google Earth and WolframAlpha, to cross reference geographical and environmental information provided in tweeted images and messages.

In keeping with the title of the workshop several speakers demonstrated mechanisms for mapping social media networks, both as a way of establishing ‘trustworthiness’ , but also in the identification of influence and influencers. Marlowe Hood and Joane Tilouine gave a really interesting insight into AFP’s ‘e-diplomacy hub’—a powerful tool for visualizing, analyzing and measuring the presence and influence of diplomatic agents on Twitter, across the globe and in real-time. AFP claim that this allows users to “watch diplomacy in action”.

Alberto Nardelli (Tweetminister & Electionista) and Matthias Lufkens from Twiplomacy each demonstrated their particular visualisations of diplomatic influence and culture, with some fascinating and surprising insights. More than half of the world’s political leaders, according to Twiplomacy, do not follow any their of their fellow leaders on Twitter. The leaders of small nations, perhaps unsurprisingly, are the most avid followers of other world leaders—allowing them to tweet “eye to eye” with their peers. Perhaps the most surprising twiplomacy star is the European Union President, Herman van Rompuy, who is reportedly the ‘best connected’ world leader with 11 mutual follows. The White House, by comparison, is mutually connected to two world leaders—The Prime Minister of Norway and the President of Chile.

The end of geography?

By way of conclusion to this short summary, I want to pick up on a throw away comment made by Dr Leon Watts from Bath University, who is currently working on a scholarly project related to digital diplomacy with the FCO. During his presentation, Dr Watts suggested that digital diplomacy could spell “the end of geography”—a somewhat terminal statement that echoed Francis Fukuyama’s similar claim about history from 1992. It also sat somewhat uneasily with the reassuringly geographical discussions that had animated the workshop.

While digital diplomacy may permit selective connectivity between diplomats, ministers and officials (intellectuals of statecraft) with ‘everyday’ citizens, these connections (rather like processes of globalisation) are unequal and contingent on issues of access and availability. In addition, issues of trust, reliability and reputation—as organisations like the BBC World Service, Voice of America and the British Council have learnt over many decades—are subject to significant variations through time and space. They are hard won and readily lost. Far from representing the ‘end of geography’, digital diplomacy requires a sensitive and critical understanding of place, space and global geopolitics. Over the next 12 months, these and other issues are going to be further explored through a series of workshops being organised as part of the Diplomatic Cultures Research Network, co-ordinated by the political geographers Jason Dittmer and Fiona McConnell.

Alasdair is a lecturer in Geography and Geopolitics at Royal Holloway, University of London. His research principally focuses on issues relating to international communications, conceptions of public/cultural diplomacy, while critically addressing the strategic redeployment of international broadcasting resources post-9/11.