Josh Holmes is a Durham geography graduate and current masters student in Geopolitics and Security. His research interests range from affect and mobilities to critical security approaches and materiality.

“This is more than a health crisis. This is a growing threat to regional and global security.”

Those were the words spoken by Barack Obama at the end of last month whilst addressing the UN General Assembly on the pressing need for an international response to the Ebola epidemic. Dominating the headlines ever since, the UK government recently carried out a nationwide exercise to test its level of preparedness in dealing with a potential outbreak of Ebola. This was in addition to the announcement of other measures designed to combat the spread of the virus, including the introduction of passenger screenings at Heathrow and Gatwick airports and the deployment of 750 military personnel to Sierra Leone- one of the worst affected countries. Such measures are indicative of the global state of emergency, which has been initiated by the West in response to Ebola, provoking a few thoughts on what characterises a “geopolitics of disease” and how such a geopolitics serves to  construct an international security crisis.

r Ebola had never really entered Western vocabulary or consciousness, with previous instances of the disease almost exclusively limited to remote African villages. What makes this current outbreak exceptional are  the geographies fuelling its emergence and continued transmission. The virus is believed to have first appeared in the body of a child last December in Guéckédou, a porous border region in south-eastern Guinea, where a highly mobile population moves frequently as part of an informal transnational economy shared with neighbouring Sierra Leone and Liberia. As the map illustrates, the disease has subsequently spread rapidly throughout West Africa’s Mano River Union and into Nigeria and Senegal; claiming over four thousand lives in ten months.

Despite repeated warnings from Médecins Sans Frontières of the struggle to contain the outbreak on the ground, it was only in August when two American missionaries were confirmed to have the Ebola virus, that the WHO finally declared Ebola an “international public health emergency” , thus galvanising awareness and support from Western Governments. Over the last few weeks the initial paucity of global collective action has been swiftly replaced by an all-encompassing security regime. Framing the discourse of Ebola through the lens of national security, rather than a public health concern, Obama’s address at the UN becomes what Ole Wæver refers to as a “Speech Act”:  presenting the virus as an existential threat to the West, in order to legitimate a realist technocratic response focused on using whatever means the state possesses to prevent the disease from reaching our shores. 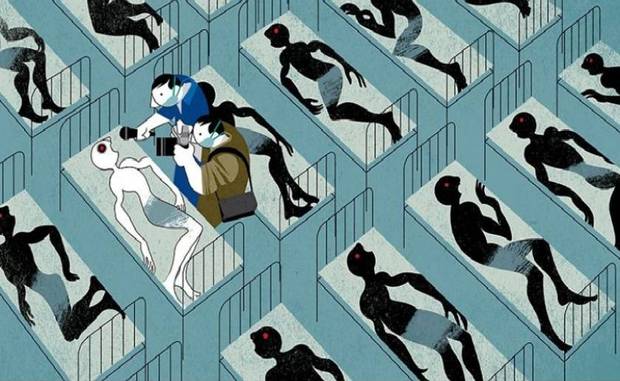 An accurate reflection of how the West talks about securitising Ebola? (Source: The Independent)

The problem is, as with any practice of securitisation, the reasons behind it are often morally dubious; shifting away from a humanist form of security and instead relying upon actions and practices of ‘Othering’ which serve to divide and demarcate groups of people, in accordance to the traditional geopolitical imaginary of “us” and “them”. This begs the question as to whose security really counts? While the two white American missionaries were evacuated and administered ZMapp, an experimental drug funded by the US Department of Defence (again blurring the boundaries between security and health), the same life-saving treatment was not made available to Sierra Leonean doctors or Liberian citizen Thomas Duncan– who died in a Dallas hospital last Wednesday after being diagnosed as the first Ebola case  in the US.

The securitisation of Ebola can therefore be seen to play out through an affective politics of fear. Drawing parallels to apocalyptic Hollywood blockbusters such as Outbreak (1995) and Contagion (2011), Ebola is scary for many because it concords with the popular narrative of an African continent plagued by tropical disease, poverty and war. The Guardian has even devoted a day of live updates to the Ebola crisis, bombarding us with confirmed cases and latest death toll figures that further heighten these anxieties.  In reality, western populations are far more likely to die from heart disease or diabetes but because these are familiar everyday illnesses they do not capture the imagination in the same way that Ebola does. However, the sad truth is, that this manipulation of fear amongst the Western public is a necessary part of combatting Ebola because, as Barton Gellman said in relation to the global AIDS epidemic, “when the rich lose the fear, they are not willing to invest in the problems of the poor.”

Whilst few could oppose a robust western response to the Ebola crisis, there is a need to be weary of how easily the securitisation of a public health problem is seen as a foregone conclusion. Rather than become preoccupied with imposing travel restrictions or border screenings (which doctors have suggested are merely political gestures given the 7-10 day incubation period for Ebola symptoms) we should remain critical of the ways in which Ebola is both securitised and represented. Moreover, rather than propagating xenophobia, the focus should be on delivering critical information on the ground through creative methods that resonate with local people, such as UNICEF’s “Ebola Song” . Elevating the threat of the virus into the realm of “Panic Politics” simply does not address the root causes of the Ebola outbreak; poverty, ineffectual health infrastructure and skewed incentive systems for the development of vaccines to combat diseases of the poor. It mainly spreads more fear.