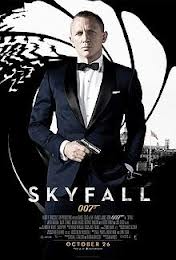 Last week, we took some of our MSc Geopolitics and Security students to see the eagerly awaited 23rd outing of Commander James Bond, in the Sam Mendes-directed Skyfall.

For a bit of fun, nine observations follow about the film and for convenience sake we have produced an acronym JAMESBOND.

J is for Jubilee Line. Well it was really the District line in the film but a Jubilee Line tube train featured nonetheless in a disastrous derailing. This is a film with a strong subterranean theme – London’s underground features strongly as Bond desperately tries to anticipate and prevent the evil genius from hatching his plan to assassinate M. Even sophisticated tracking and surveillance technologies struggle to keep up with an assassin well trained in the art of field-craft and camouflage, who is well able to use disaster protocols to his devilish advantage.

A is for affect. This is a film about the politics of fear and the way in which security discourses and practices seek to manage populations. As M tells an Information and Security Committee meeting – how safe do you feel? Who can you trust? A dramatic explosion within the MI6 building forces M to confront the alarming possibility that she might in effect lose her job because of the spectacular nature of the assault. Her superiors fear that members of the public might lose confidence in the capacity of the secret services to do their job. M’s cool but ultimately affecting performance before the committee is crucial to her holding on to her post and her commitment to James Bond.

M is for M. It has to be. This is the third film to explore in ever more poignant detail the intense relationship between M and James Bond. While this relationship is mocked by a rogue MI6 agent (Silva) for his relationship with ‘Mummy’, the intimacy of this relationship unfolds in a variety of sites ranging from the office, M’s home, in the field and finally, and poignantly, in an abandoned church. As Vesper recognized in Casino Royale, Bond’s childhood’s history (losing both parents at an early age) continues to traumatize him and drew him into a close relationship with a boss who was prepared to lie about his capacity to work in the field.

E is for evidence. Fragments from a bullet, a gambling chip, and a missing hard disk are some of the material objects that make up the evidence trail for Bond and MI6. Making sense of evidence requires not only specialist training (we see Q furiously working a computer keyboard) but also exercising judgment about when to follow a particular lead. After killing one assassin in Shanghai, Bond discovers a gambling chip and decides to travel to Macau to a casino and attempt to cash in the value of the chip itself. This in turn generates new intelligence and a new lead regarding the possible identity of the person or people behind the theft of a hard disk containing vital information about NATO agents.

S is for Skyfall. The denouement of the film occurs in northern Scotland in Bond’s childhood family estate, Skyfall. It is a remote house surrounded by heath and moorland with only one access point, and as the gamekeeper reveals, has a priest hole. Having smuggled M out of London after an attempt was made on her life, Bond is able to use the physical structure of the house including secret tunnel to establish a murderous trap for Silva and his henchmen. We later discover that the estate chapel also houses the graves of Bond’s late parents. In contrast to the bustling cities of Istanbul, London and Shanghai, the closure of the narrative arc unfolds in a place haunted with family memories but tactically simpler to defend and destroy.

B is for body and for boys. Daniel Craig’s torso enjoys considerable exposure. The camera lingers in a number of scenes on his muscular torso and later his scars. Some of which are recent and some are not so recent. We see Bond cut out fragments from his upper chest area and later hand them over to Q branch for analysis. But the face of his adversary Silva is also a subject of concern. Both men have been tortured in the past. In Silva’s case, his attempts to commit suicide were unsuccessful and the after effects of swallowing cyanide horribly damaged his face. Is this a misogynistic film? There are three main female characters (Eve, M and Severine), and by the end of the film two have died and the other has decided that she would rather work in an office than serve as a field agent. What is striking about those three characters in their very different ways is that each is critical to Bond’s welfare – Eve saves Bond in Macau (after accidentally shooting him in Turkey), Severine leads Bond to Silva and his secret lair on an island somewhere off China and M provides emotional and physical support to Bond throughout his career. It is M, after all, who passes Bond fit for duty even when his aging and injured body and mind appeared to have failed all the standard tests. While Bond clearly depends on these women, he and his new boss Mallory nonetheless survive despite their injuries.

O is for office. M’s office, in so many past Bond films, featured at the start of a film when Bond discovered his latest mission. After momentary pleasantries with Miss Moneypenny, Bond entered the office, learnt of his mission and picked up his equipment from Q. Since Judi Dench’s role as M, the office has been a place of more protracted conversations and furnished in a very different manner even to the point that the camera lingers on a figurine of a bulldog embossed with a Union flag. Intriguingly when M’s successor is confirmed as Mallory, a former soldier who served in Northern Ireland (and who was tortured by the IRA), his office is more reminiscent of past M’s with a striking picture of HMS Victory on the wall.

N is for nostalgia. Skyfall is a nostalgic film dealing with personal and national memories. For Bond, the aging process provokes both nostalgia but also irritation when he discovers that the new Q is half his age. When MI6 is assaulted, the organization relocates to a secret underground location last used in the Second World War. Churchill is mentioned at least once. The presence of the United States is minimal bearing a very brief reference to their intelligence networking capabilities. There is no Felix Leiter. There is no CIA interface. Britain and Bond stand-alone against a rogue agent who was tortured by the Chinese in the run up to the handover in 1997. But as the film suggests the problem with nostalgia is that we remember some things and not others, and Silva’s anger against M is precisely motivated by the fact that he was considered disposable in the light of a bigger concern to ensure that there were no spying scandals in a period of delicate transition.

D is for DB5. The Aston Martin is back, and plays a crucial role in transporting M to Bond’s Scottish home, Skyfall. Having won the DB5 after a card game in the Bahamas, we assumed it was shipped back to the UK but was not seen in Quantum of Solace. As a garage door is rolled back, the car awaits both him and M. Having deliberately parked the car so that it was facing the front door, Bond later reminds us why the car was so avant garde for its time. Machine guns pop out behind the headlights and are put to use with deadly effect. As earlier exchanges with Q demonstrated, technology is a subject that is bound up with age and experience. When the DB5 is spectacularly destroyed in a fire-fight the camera lingers on Bond’s face.

Klaus is Professor of Geopolitics and Director of the Politics, Development and Sustainability research group. His areas of specialism are geopolitics and security and in particular popular geopolitics and the international politics of the Polar Regions. He has worked with UK government departments such as the Foreign and Commonwealth Office and acted in the past as a specialist adviser for the House of Lords Select Committee on the Arctic.