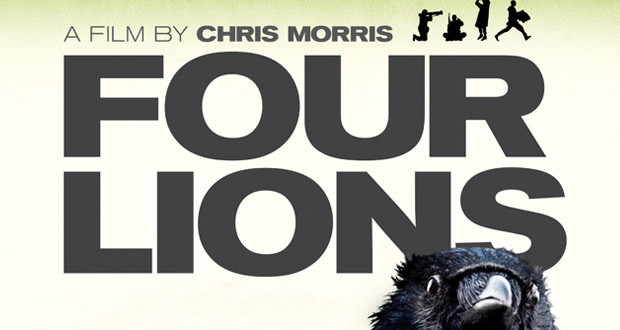 Chris Morris’ 2010 film Four Lions was one of the first pieces of popular culture to introduce me to the idea of humanising monsters. The spectre of the ‘terrorist’, so large in western imaginations since 2001, is brought down to the level of a human being through the simple trick of reminding us that everyone can be an idiot.

It is not, of course, a simple or flippant topic. In 2010 Al Qaeda was a very real threat – it has been linked to attempted bomb threats in the UK and the Vatican for example – and the destruction caused by ISIS and fears of radicalisation are now regular features in our media. What makes someone commit acts of terror is not always clear, despite anti-extremist security policies that attempt to identify the warning signs. What Four Lions does, in my view, is to remind us that terrorists are also human beings, and that to examine their motives and the process of radicalisation from any other perspective is more likely to create a climate of fear and hypersecurity than do any productive work.

Four Lions is the story of leader Omar and his group of friends – convert Barry, close friend Waj, Faisal, and Hassan who is recruited halfway through. Their ultimate goal is jihad against the west and all its perceived sins, from massacre of innocent Muslims to McDonald’s burgers. Their goal of setting off bombs is serious, but their methods are a tragi-comedy of plain human idiocy fuelled by a sense of injustice and a desire to prove in what can be described as an engaging and plausible farce .

Omar, Barry, Waj, Hassan (the final ‘four lions’) and Faisal stumble their way through a comedy of errors from accidentally killing Osama bin Laden in Pakistan to blowing up farm animals, and comparing their assumed ascendancy to Paradise to skipping the queue at a ‘rubber dingy rapids’ ride. Their rhetoric is reminiscent of every conspiracy theorist looking for a fight – “Jews invented spark plugs to control global traffic” – their targets a constant source of argument, and Waj and Faisal’s conviction is low from the start. They embody the post-7/7 image of a ‘homegrown’ terrorist mixing up bombs in the kitchen sink, indistinguishable from ‘normal’ people. 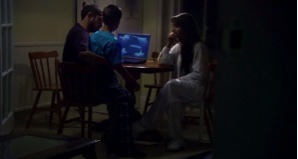 Figure 1: Omar’s wife and son encourage him after a dispirited Omar gives up on his plans (Copyright Film 4)

In addition to the main characters own actions, their relationships with side characters also serve to upset the ‘standard’ image of a terrorist in western imagination; Omar’s wife and son, and his brother. He clearly has a positive relationship with his wife and includes her in all his plans. His young son also knows and listens eagerly to Omar’s version of The Lion King in which he changes Simba’s journey reflects Omar’s own plans. Omar’s brother, on the other hand, is a devout Muslim who is always armed with a collection of quotes from Muslim scholarship in order to express his disapproval of Omar’s plans. He refuses to be in the same room as a woman and criticises Omar for failing to control his wife. His treatment of women is problematic and deserves significant attention from anyone who considers themselves a feminist, but not from anti-extremist policy. These characters place the would-be jihadists within a positive, stable family setting, and also challenge simplistic use of terms such as ‘moderate’ and ‘radical’. Moderate is not equated with safe, and devoutness is not equated with terrorism. Western leaders – Obama and David Cameron – have recognised that simplified discourses about what ‘makes’ a terrorist, and equating terrorism with Islam, can only be harmful and alienating, and Muslims around the world utterly reject the idea of IS having any legitimacy and have condemned its actions. 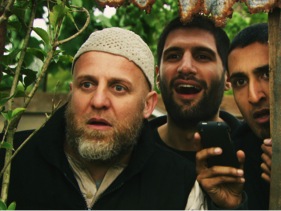 The end of the film, in which the remaining four men – Faisal dies halfway through when he trips over a sheep while carrying explosives – choose a marathon as their target, is the most humanising part. The scholar Faisal Devji, in his work ‘ uses transcripts of comments made by Bin Laden after 9/11, and other people involved in terrorist acts, to frame Jihad as a kind of speech act; the communication of a message with global impacts. The self-styled ‘Four Lions’ fail utterly to communicate any meaningful message through their deaths. Hassan panics and gives himself up; his explosives are detonated by Barry, killing him instantly. Barry’s fate is sealed when he chokes and is given a Heimlich manoeuvre by a bystander with deadly results. Waj, confused and convinced he is doing the wrong thing, runs into a kebab shop – run by Muslims – and is cornered by armed police. He detonates his bomb in confusion, while Omar on the other end of the phone desperately tries to stop him. Despondent, clearly no longer believing in their ‘cause’, Omar walks into a nearby Boots and detonates his bomb.

There’s no message, no grand gesture against the perceived violence or injustice carried out by the West against Muslims, only five men whose basic human stupidity and anger took a violent turn. It’s not about empathy or forgiveness; the ‘Four Lions’ were attempting to commit a deadly and serious crime against innocent people and the need to prevent real-world equivalents is very much present. It’s about understanding that radicalisation is not necessarily a process with clear political or religious ideology, nor is it the creation of demonic monsters beyond human comprehension. In Four Lions at least, radicalisation is portrayed as a violently misguided expression of a sense of injustice and a desire to be something greater. In the end, with all their mistakes, incompetency, and anti-Semitic, anti-Western, politics, Omar and his disillusioned band were more like three and a half hissing housecats than the four lions they imagined themselves to be. As western governments take steps to prevent ISIS radicalising their citizens, and to avoid tragedies like the recent Paris attacks, perhaps returning to Four Lions can remind us that the process of radicalisation is not always as clear as policy might suggest. By humanising the people behind violent terrorist acts, can we make ourselves more effective at countering ISIS’ narratives, and avoid alienating innocent people?

Alice Oates is an MSc Geopolitics and Security student. She studied an undergraduate degree in Geography at Cambridge and is interested in popular geopolitics, feminist geopolitics, and how systems of power are developed and reproduced.

Klaus is Professor of Geopolitics and Director of the Politics, Development and Sustainability research group. His areas of specialism are geopolitics and security and in particular popular geopolitics and the international politics of the Polar Regions. He has worked with UK government departments such as the Foreign and Commonwealth Office and acted in the past as a specialist adviser for the House of Lords Select Committee on the Arctic.