In my earlier posts in this series, but especially in Part IV, I’ve discussed how border control, while purporting to manage the distinction between “inside” and “outside,” also influences what goes on within the “inside.”  Usually, these two functions of border control work in concert with each other, but occasionally they are at cross purposes.  I’ve encountered this over the past few weeks as I’ve gone through the process of applying for a National Insurance number.

A National Insurance number — similar to a Social Security number in the U.S. — doesn’t in itself enable you to work, but it does allow you to pay taxes, and thus you need one before you can be paid to perform any work in the U.K.  Since I knew that I’d need one and I was already being asked to complete paperwork for Royal Holloway that asked for my NI number, I decided to be efficient and apply back in March, when I was in the U.K. as a business visitor.  I had a rather comical conversation with the person at the Office of Work and Pensions call centre, which you have to  call to make an appointment at your local Job Centre.  When I explained my situation, she asked me if I’d qualify for an NI number given that I didn’t yet have a visa in-hand.  I told her that it didn’t seem to me that it should make a difference (since the NI number doesn’t actually give one a right to work), but I (politely, I think) reminded her that it was she, not I, who interpreted and enforced the rules.  She responded by suggesting that I keep the appointment that I’d just made, since my application might be approved.  A few days later, I went to my local Job Centre where I again was told that my application might or might not be approved.  But they took took my particulars, gathered photocopies of relevant documents, and told me that the whole application would be sent “to Glasgow” where it would be decided on in two to four weeks.  I subsequently received a letter rejecting my application because at the time I didn’t have a right to work in the U.K. 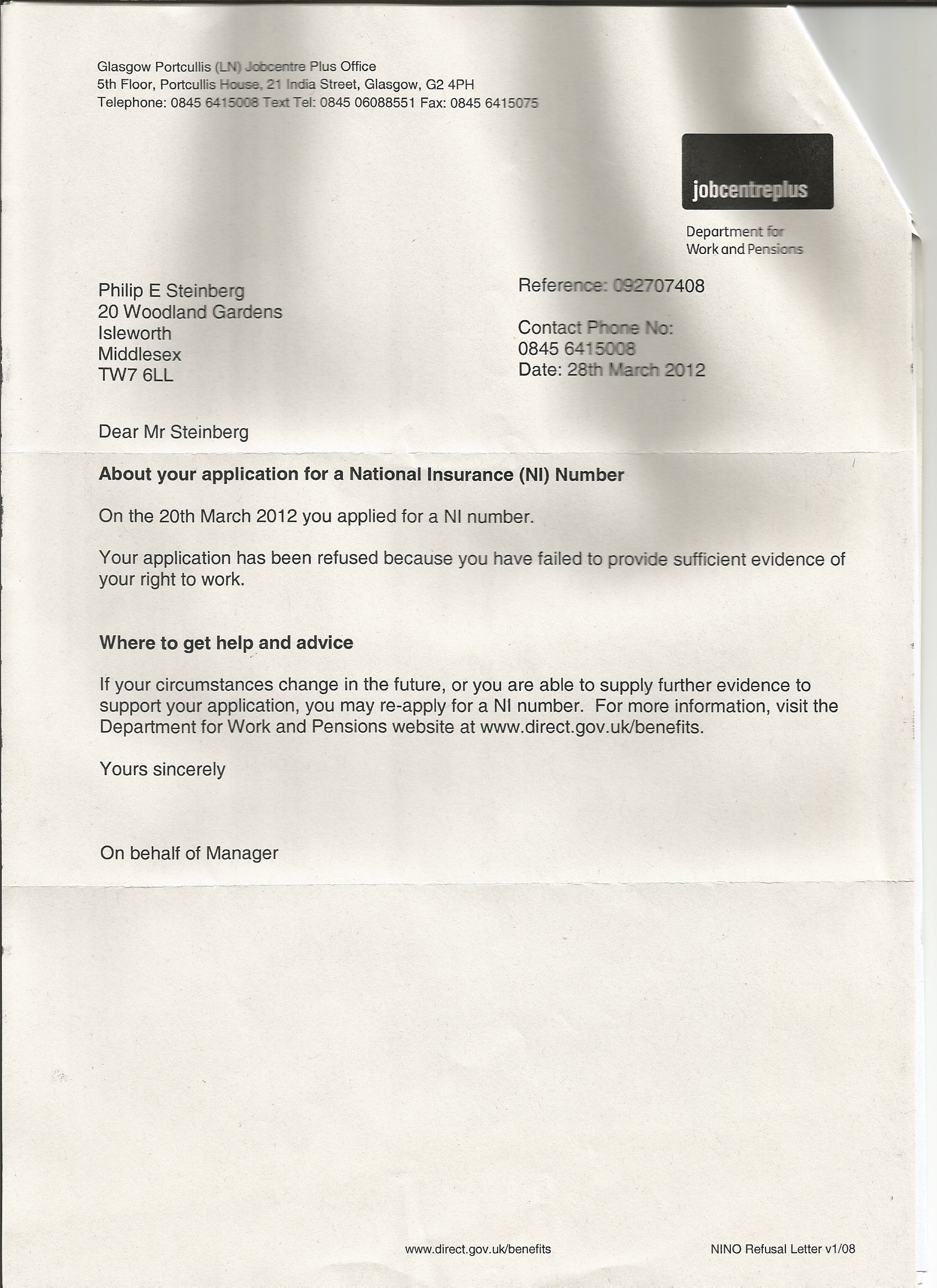 This past Monday, now that I was back in the U.K. with my tier-2 work visa, I rang the call centre and made an appointment to reapply, and this morning I went to the Job Centre and things seemed to proceed without any problems.  My fate, however, is once again being determined in Glasgow.

Getting back to the topic of the mismatch between border control’s border-management function and its social-management functions, with which I began this post, however, I’m struck by a Catch-22 in the whole situation.  Here’s what I found out:

In other words, the system is set up so that it’s impossible to actually start working on the date on which you’re supposed to start working.  If they didn’t make exceptions, the result would be that migrants would be forced to spend time in the country not working, which, of course, is precisely what the system is supposed to be designed to prevent!

In fact, there is a solution.  Employees are, for their first few weeks, until their NI number is issues, assigned a provisional number and taxes paid under that number get grouped with those paid under the real number once it’s assigned.  Nonetheless, the fact that the system regularly requires a work-around to make it function suggests that two different agencies (in this case the UK Border Agency and the Office for Work and Pensions) with two different missions (controlling the borders and controlling what goes on within those borders) are not perfectly aligned, a further indication of (or perhaps a metaphor for) the uneasy and at times contradictory relationship between the two functions of border control.